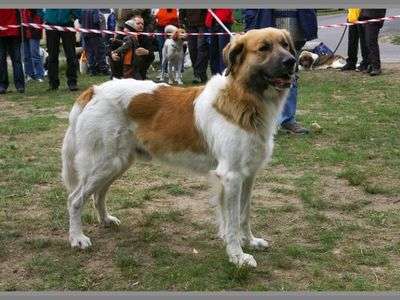 The Czech Mountain Dog is a breed that originates in the Czech Republic. Having a resemblance to the old Bohemian Mastiff, this breed is comparatively new, and was developed towards the end of the 1970s.

The Czech Mountain Dog is a cross between a Canadian working dog and a Slovakian watchdog. As well as the original two breeds there are traces of Chinooks, Alaskan Malamutes, Siberian Huskies and several other breeds of Arctic dog. There are unconfirmed reports that added to the line during the 1980s was Landseer, Central Asian Malamutes and English setter blood. These animals are used primarily for "mushing" sports. These include skijoring, sled-pulling, bikejoring and others.
This type of dog is very powerfully built and tough. It is known for its intelligence and resilience. There are slight breed variations in the appearance that can be found, but it is an entirely standardized blood line. They are shown in dog shows all over Europe.
Considered to be friendly, mild-mannered and even-tempered, the Czech Mountain Dog can however, at times be over territorial and confrontational with other dogs. They are good looking animals and have all of the characteristics needed to make good family pets, and also excellent watchdogs. They have broad chests and well-defined bone structure and are usually very healthy animals with a long lifespan.
The coat of the Czech Mountain Dog is waterproof and dense, and most commonly coloured white with dark markings in a variety of shades.

The dog is a product of 20th century Czechoslovakia breeding techniques. The aim in the 1970s was to create an animal that was 100 per cent suited to the local climate conditions. The goal was also to make a strong animal that could be suitable for mushing. The inaugural litter was born in 1977 on August 12. Seven puppies were born in that first litter. The demand for Czech Mountain Dogs peaked in the 1990s, but today they are still popular, but not one of the better-known breeds. They are mainly bought as pets or used as avalanche dogs.

The male height is between 62-70 cm and the bitch 58-66cm. The female weighs between 28to 36 kg on average and the male 32-40kg. This is a superb looking dog, with a medium-sized oval face, black nose and dark eyes. It has prevalent lips that hide large teeth that are capable of a regular scissor or pincer bite. The ears are big and triangular shaped. They are drooping and set high on the head and far apart. The neck of this animal is of medium length with a strong muscular structure. The tail is inserted on the "rump line" and is covered with a thick coat. When the tail is not in action, it is slightly curved upwards and kept low. In action, it is sickle-shaped and above the back line.

The coat of the Czech Mountain Dog is long with a length of up to 10cm. The coat is straight and thick, with the belly heavily coated as well. The hair on the front limbs and head is shorter. The colour is normally spotted though the head is a uniformed colour with possibly a blaze.