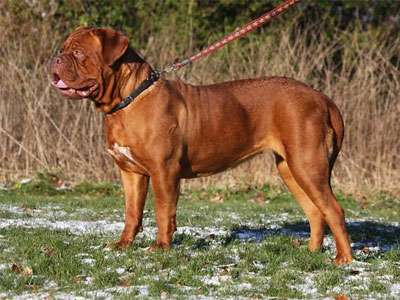 This fun-loving breed is very protective of its family and thrives when kept alongside another Dogue de Bordeaux dog.

This is a relatively short and stocky mastiff that features a massive broad and heavy wrinkled head. The muzzle is rather short in comparison to the head and is powerful, wide and thick that features a pronounced stop. The large features wide nostrils, while the teeth form an under bite and the thick lips hang over the lower jaw. The neck of this breed features thick and loose skin, while the eyes are either dark brown or haze and are set far apart. The small ears hang down and tend to be darker than the coat colour, which varies from mahogany to fawn with a darker mask and white markings on the tips of the toes and the chest. The legs and chest are muscular, while the coat is soft and short.

The Dogue de Bordeaux has calm temperament and is very loyal, patient and devoted to the family. It is important to socialise this breed well, as its fearless nature can lead to aggression if not trained properly. However, the Dogue de Bordeaux is very good with children and loves to play. Because this is such a powerful breed, special care is needed to teach the breed its place in the family so that it does not become overbearing. A firm hand is needed during training, but with confident and consistent training the breed is easy to manage. Snoring and drooling when sleeping are common traits of the Dogue de Bordeaux.

Although most Dogue de Bordeauxs are very healthy, the breed is prone to hip dysplasia. Cases of heart problems, epilepsy and hyperkeratosis have also been recorded, although they are not common.

The Dogue de Bordeaux can live happily in an apartment as long as it gets plenty of exercise during the day and the breed is fairly inactive when inside. The Dogue de Bordeaux should not be left alone for long periods of time, otherwise it will tend to become destructive and act out in other ways.

This breed requires a lot of exercise in the form of a long daily walk. Dogue de Bordeauxs that do not receive enough physical and mental exercise have a tendency to develop behaviour problems, so it is important that the breed is keep entertained and stimulated. Very little grooming is needed and the Dogue de Bordeaux is an average shedder. The coat should not be washed too often and brushing is usually all that is required.