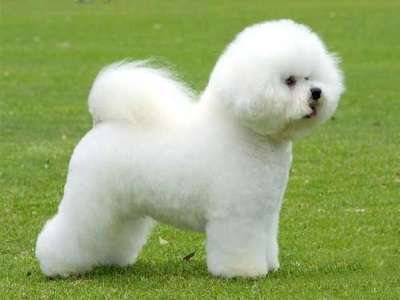 Cute, friendly and simply adorabe, the Bichon Frisé is a popular dog breed. Bichon Frisé, which literally means curly lapdog in French, is a very loving and affectionate dog, which has a cheery and friendly disposition. This small dog breed is becoming increasingly popular.

The Bichon Frisé was first bred in the 13th century, but didn’t become popular until the 16th century. This breed is descended from the Water Spaniel and the Poodle, and has a very interesting history. The breed has been used or all sorts of purposes. Originally, the Bichon Frisé was popular with Spanish painters, and then they were used as circus animals.

The Bichon Frisé is small dog breed, which is considered a toy dog in the UK. They have a soft, very dense, double coat. The outer coat is slightly coarser than the undercoat, which is very soft. The coat continues to grow, but doesn’t shed much. This means that they require frequent grooming to prevent matting. The fact that the Bichon Frisé doesn’t shed much, means it is a perfect breed for people with allergies.

The Bichon Frisé is a dog that has a very bright and cheerful personality. This breed loves the company of others, whether it’s other animals or humans. Generally speaking, the Bichon Frisé is an affectionate dog, which loves lots of attention from its owners, and anyone it meets. They are incredibly social dogs that love to interact with others. They also have a very gentle disposition, which means that the get along with other animals really well, and they are also good with children. While they are loving and friendly, this breed is also very playful, bold, and energetic.

While the Bichon Frisé is a small dog breed, it is still an energetic breed. This means that they need frequent exercise to burn off energy and stay healthy. They need to be played with and walked daily. Dogs have an instinctive desire to roam, so if they don’t go out for a walk daily, they will become frustrated and may develop behavioural problems.

As the Bichon Frisé is a medium-intelligence dog, they can be trained fairly easily. This breed has a happy disposition and love attention from others, so they respond well to positive training.

Overall, the Bichon Frisé is happy dog that loves being around others. This breed is ideal for families, as it gets along so well with children.