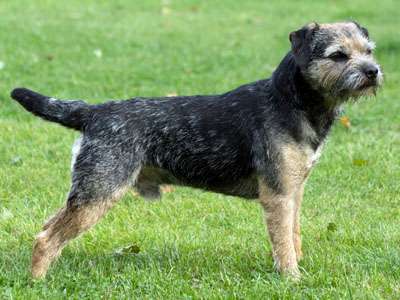 This charming breed makes an excellent companion, while it is also used by many farmers to control vermin such as mice and rats. The talented Border Terrier has a number of different skills including tracking, hunting and performing tricks.

The Border Terrier was first bred in the Cheviot Hills, which is situated near the border between Scotland and England. This is believed to be one of the oldest types of terriers in the United Kingdom and it was originally used by farmers to kill foxes. The small size of the Border Terrier made it ideal for digging into fox dens and driving them out to kill the foxes. While compact, the breed is large enough to keep up with horses on a hunt and was also used to hunt animals such as otters, rats, mice and martens. The breed was recognised in 1920 by the British Kennel Club, while recognition from the American Kennel Club followed in 1930.

This small and medium-boned dog has a narrow body and shoulders with a relatively wide space between its eyes. The short muzzle is usually dark and features a moderately broad stop and a black nose. The strong teeth have a scissors bite, while the dark, v-shaped ears are set on the sides of the head. The legs are straight, while the tail is medium in size and thick at the base, tapering as it reaches the end. The coat is short, dense and wiry and is usually red, light brown or tan with white patches on the chest.

This breed is alert and bold as well as being extremely agile. The Border Terrier loves playing with children and its affectionate and mild-mannered temperament makes it the ideal companion for children and other family members. The Border Terrier tends to be eager to please their owners, which makes them particularly easy to train. Although the breed is prone to barking they are not aggressive and can provide a good early warning system against intruders. Puppies can be skittish, so it is important to make them accustomed to loud noises early so that they do not become timid. This breed needs to be socialised well to avoid its shy nature from coming forward. Due to its hunting instinct, the Border Terrier should not be left alone with household pets such as rodents and birds.

The Border Terrier is prone to a recently recognised health condition called Canine Epileptoid Cramping Syndrome, which is also known as Spike’s Disease.

This breed can live in an apartment if it receives regularly exercise and is fairly inactive when indoors. Because the Border Terrier likes to dig, it is important to fix the bottoms of fences with additional support to prevent dogs from digging out of gardens.

The Border Terrier requires a lot of exercise each day, including a long walk or run. The breed has a long of stamina and thrives when active. The dog’s wiry, durable coat requires weekly brushing as well as professional grooming twice a year. Because the Border Terrier hardly sheds it is a good dog for people who suffer from allergies.