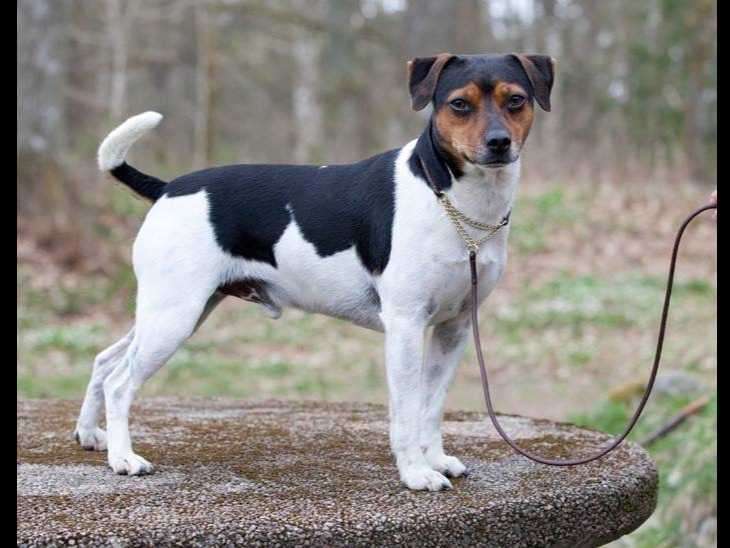 The Danish-Swedish Farmdog or Dansk-Svensk Gårdshund was bred on danish and southern swedish farms.
After the rescue of the last specimens by danish breeders, the breed was recognized nationally in 1987 and in 1989, 50 specimens were publicly exhibited in Copenhagen.
The FCI has provisionally recognized it in 2008.

The Danish-Swedish Farmdog looks similar to the terriers, but is actually a pincher, wich the temperament is the biggest wittnes to. A dog wich is more than a 1000 years old and the Vikings had this dog with them. A very easy outgoing dog, who loves to be very social with people and other dogs.
It is compact, slightly rectangular and has short, smooth fur. The colors are reminiscent of a Jack Russell Terrier with a white base color and different sized spots in black, brown and beige.
Females are between 32 and 35cm, males between 34 and 37cm tall. A very healthy breed where they live about 14 - 16 years.

He is an easy-to-raise, alert dog with no tendency to stray, but because off their strong huntingskills they can come a little wide around and if you have a garden holls are common and a fence aound a very good thing. They a very strong huntingdogs after mice, rats and birds. Because they a very social, they love to be with their owners at all time and are therefor very easy to travel with
Today he is a popular family dog, today they are very popular dogs, because off their easy learning and they are still used as rat dogs by professionals but also in cirkus, agility and a lot of other things.