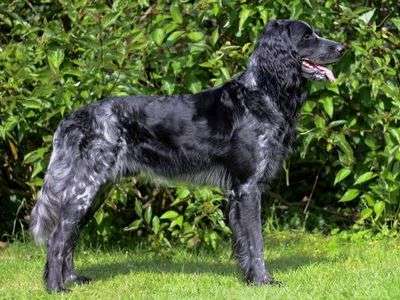 The Large Munsterlander is a talented and noble hunting dog. Male dogs of this breed reach a shoulder hight between 60 and 65 cm and female dogs from 58 to 63 cm. The weight is 30 kg. It has got a long stretched head, dry fang, middle long, highly set and well frayed hangings and dark, well closed eyes. In comparison with the wideness the breast has to be deep enough, the back straight and hard, the part of the kidneys muscular and the croup has to fall down moderately. The tail is highly set regarding the whole propotions of the dog's body. It is worn slightly up bent. It is important that the end of the tail must be docked round about 2 cm, after birth sometimes occuring after claws have to be removed. The shoulder blade, upper arm leg and the under arm- and feet bones should form a vertical line if the Large Munsterlander is standing, shoulder blade and upper arm, looding from the side, a right angle. Ankle- and feet joints of the hind legs are well angled. The Large Munsterlander is long, simple and at least slightly waved haired. This pet appears white with black stripes, white with points and similar to a white horse. All over black is not wished and brown is seen as a mistake.

Originally the Large Munsterlander is a variety in colour of the German Roughhaired (Deutsch Langhaar), besides descendant of the medieval long haired bird dogs, that were excluded from the Deutsch Langhaar breed. Their lovers bred the black-white dog as own breed.

Versatilely used hunting dog, its strength is the work after the shot.

Likes to lead, quick to learn and lively. It is sure in reading hints. Excellent in work with water. Watchful, in family the Large Munsterlander is loyal.